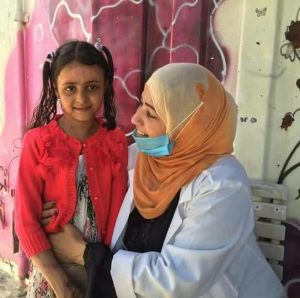 The founder, Maged Al-Saidi, grew up in Yemen. He went to Germany as a student and found a new home there. The idea behind founding an organization came to him through telling friends and colleagues about the war and crisis in Yemen, and more and more people asking him how they could help. Together with friends, he founded the organization “Kinder Jemens in Not.”

The association was founded in February 2017 in Munich. It is recognized as a non-profit organization and entered in the register of associations (Munich Local Court, VR 207136). Donations are fully tax deductible. The board of the association consists of three people, currently Maged Al-Saidi, Martin Rasper and Gisela Hoffmann. All members of the board, as well as all members of the association in general, work exclusively on a voluntary basis, there are no administrative or personnel costs, and all donations go directly and completely to the aid projects.

How the help is received

Due to the war, aid deliveries can only reach affected areas with great effort. Since the outbreak of the war, the airspace over Yemen has been largely sealed off. The airport in the capital Sanaa can no longer be used as regularly. Since the summer of 2018, the Hudaydah port, through which most aid deliveries arrive, has also been contested and partly destroyed. All of the parties to the conflict contributed to the suffering of the civilian population by restricting humanitarian aid deliveries or allowing them only within certain areas. As a result of this, aid supplies can barely reach certain areas. It is precisely in these areas therefore that we are taking action.

Help is given by providing families with the necessary financial means to buy food and school materials and to be able to cover the cost of medical treatment. In addition, the organization uses its funds to purchase construction materials to build a children’s clinic in the rural area of the Ibb province, and for its medical facilities. For this purpose, the organization opened an account at the international Bank of Yemen, which allows for the transfer of funds from Germany. This account is represented in Yemen by its legally recognized partner association “Yemen’s Children in Need”

Our concept is to help directly on site in Yemen with our partners. Currently we have 6 helpers working in different cities and rural areas, three of which are doctors, two male and one female. Our focus lie mainly on the cities and regions around al-Hudaida, Sanaa, Taizz, Dhamar, Ibb and Al-Qafr.